On September 7th, I was in Atlanta, GA dealing with severe discomfort from a loud ringing in my left ear. It made me aware of an internal battle I could no longer ignore which revolved around the question: WHO AM I?

After that night in Atlanta, I continued this practice. Seven days later it dawned on me that I wasn’t living, I was simply going through the motions. This realization led me to post a quote from my book that stated: Lifestyle is not something you do, it’s something you live. Later that day I followed up with another post of an image of me trapped in a cage.

Two days later, on September 17th, I posted the image of a blank canvas symbolizing that even when you feel trapped and overwhelmed, there is always space to get out and start anew. 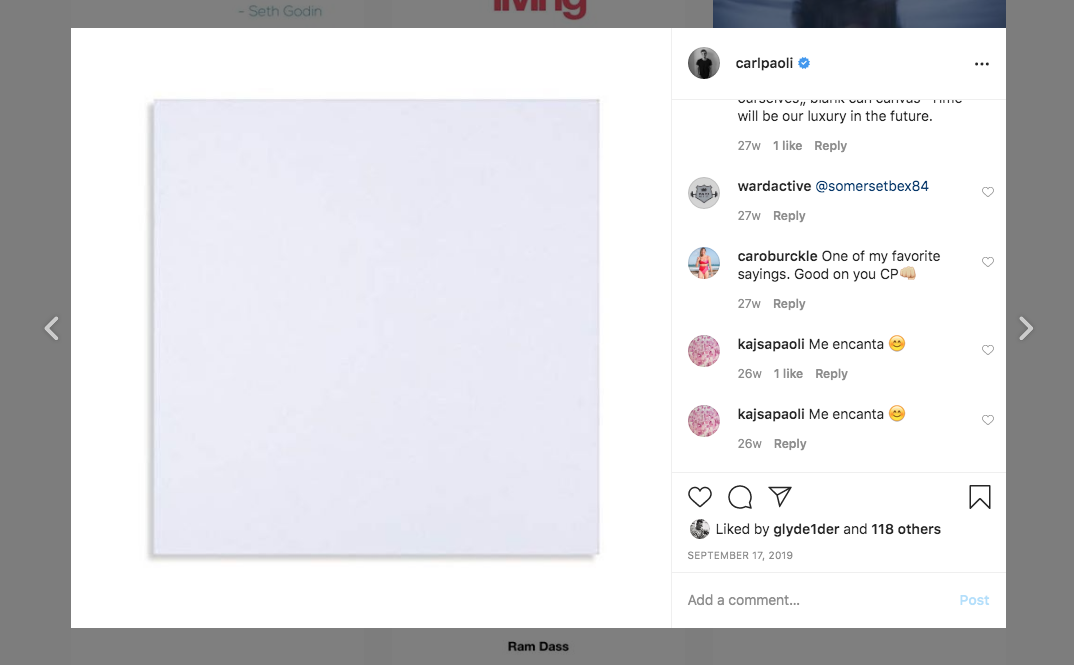 On September 18th I posted the image of a calm monkey bathing in a hot spring with eyes closed. The caption read: See your future, be your future. This post was intended to depict where I was that day and to mark the beginning of a period of time dedicated to deep reflection. 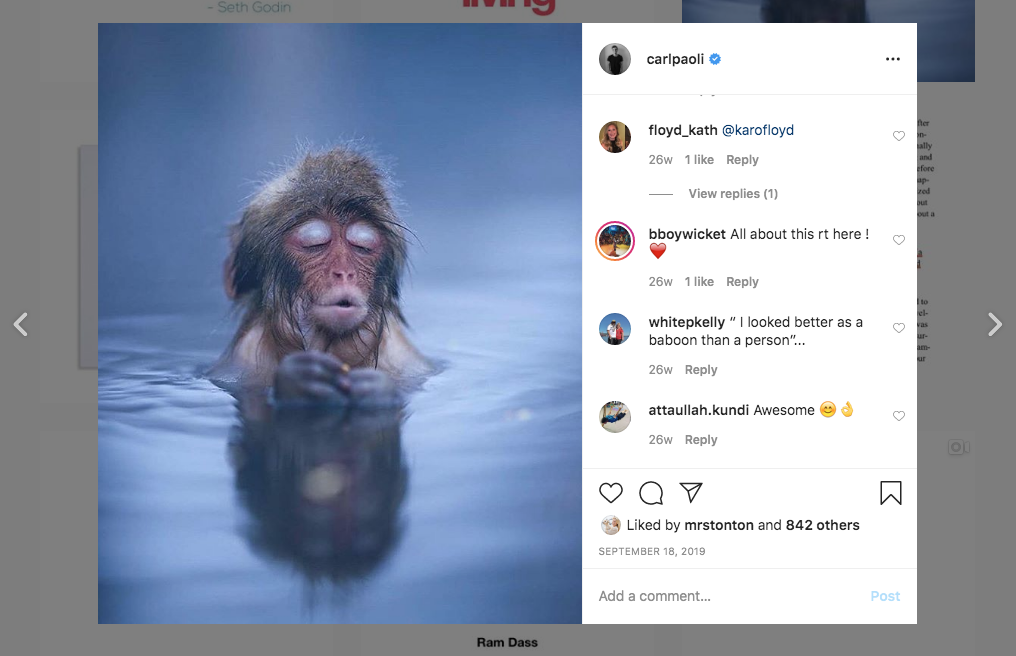 A few hours later, I posted an image that read: A LIFE WORTH LIVING. A purpose that had crystallized for me over the past 11 days and that I had to find the answer to by asking myself:

What does it look and feel like to you?

I knew this question was where I had to start. My mind and my heart needed to be in coherence. I had to identify that which I valued on this planet the most in order to anchor my purpose and mission in this life. Although answering this question is still part of my daily practice, I am beginning to RE-MEMBER. I am putting all the members and pieces back together. 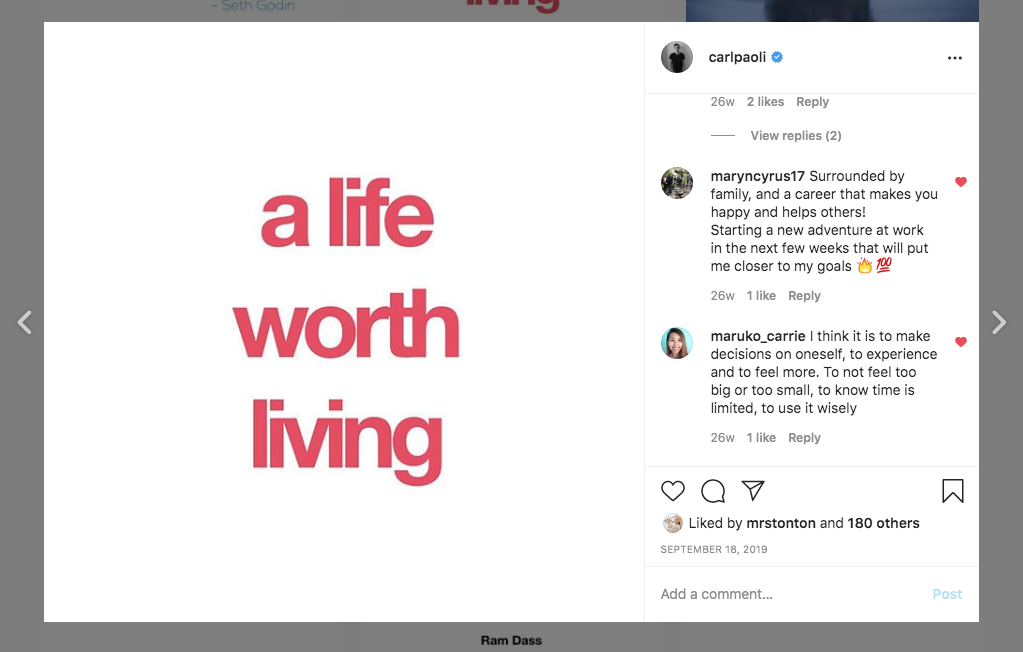 On September 19th I posted an excerpt from Seth Godin’s daily email which stated that creating and leading requires action and one must simply begin. This period of reflection in my life was the time to begin practicing how to express what had been brewing inside me. 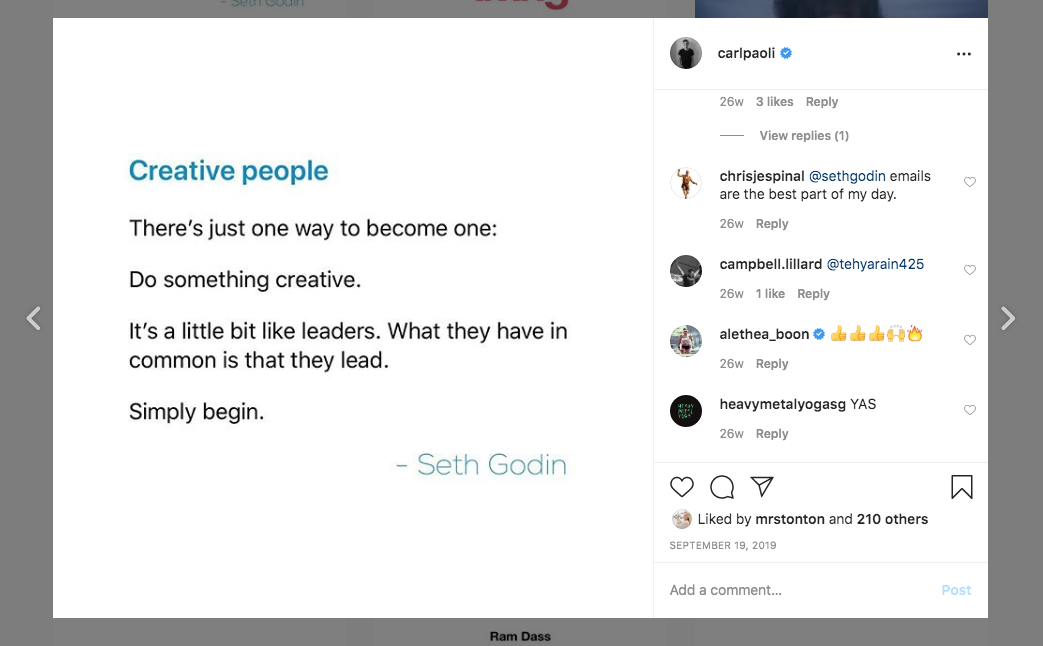 On September 20th I posted the words: Laugh More, followed by another post of a great white shark peeking out of the water showing its teeth. The caption read: Cute. It was my sneaky way of sharing that our fears have beauty and can be laughed at if we are able to see the clever (*look up origin of the word cute) message behind them. At the end of that day I posted a picture of Tonya kissing our beautiful dog Cali with the caption: IN LOVE. The intention was to remember that love is not an action but the matrix we live in. The matrix being the womb. The mother from which all is born.

On September 21st I posted the word EGO casting a shadow that read FEAR. The ego being the “who we think we are” and its shadow being the fears we cast and project in our lives. The message I intended to share was that If one can see that the reality we live in is the shadow of what we think, we change our thinking and thus change what we manifest and project into the world. 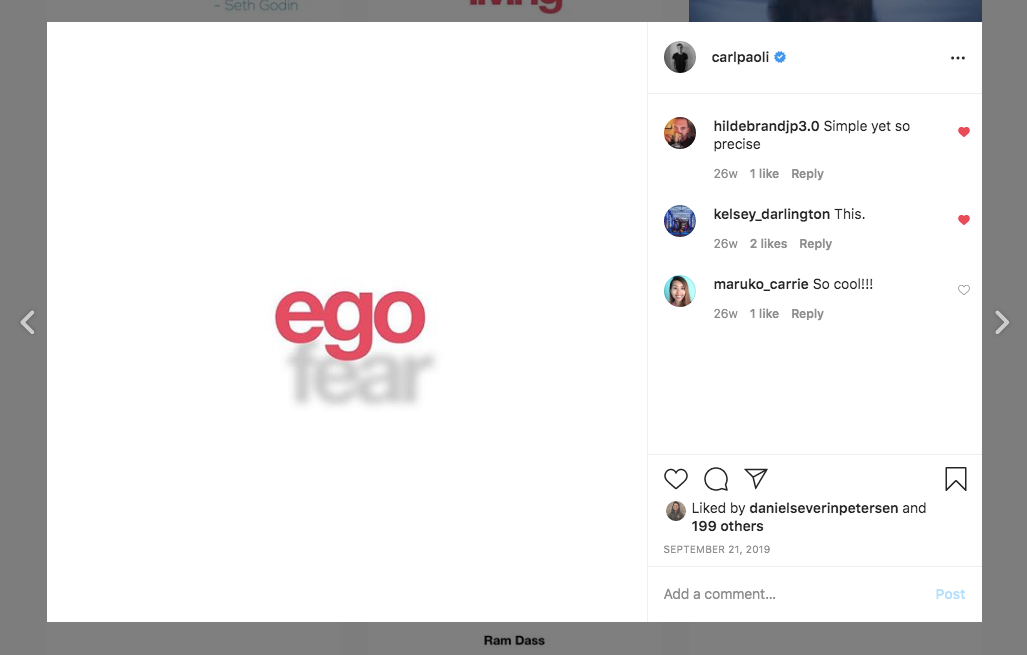 On September 22nd I posted the image of a surfer riding a wave and a beautiful dolphin breaching out of the water right next to him. The caption read: When we least expect it, we can have the experience of a lifetime. The interpretation of this was that once one can let go of who they think they are, be open, and simply ride the wave of life, one will get to experience the magnificence of life itself.

Later that evening I posted another picture of a diver swimming with a humpback whale. When I  saw this image, I could see myself reflected in the whale. A large, pure, peaceful being simply floating in the ocean of life next to another being which on the surface look different but inside are mirror images of each other.

On September 23rd I posted an image with the words: CARE FULL. It was time for me to let go of always being careful. It was my way of sharing that I was transcending into a new level of consciousness where I was able to live FULL OF CARE instead full of fear. 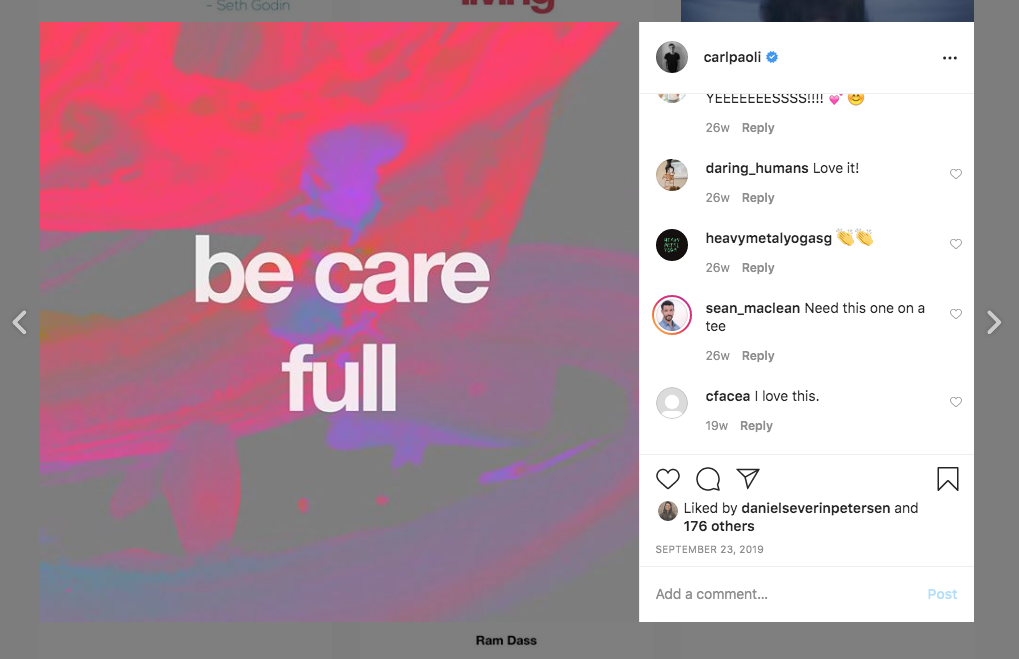 On September 24th I posted a video of an otter sliding down a snow hill and captioned it: Real footage of me living life.

I was finally starting to flow through life. It felt FUN. That evening I posted the words: Create and Attract. The words that have since become a mantra I repeat to myself on a daily basis and work like magic  Like saying Abracadabra, which I have learned translates to: I will create as I speak. I followed that post up with piece by Shantell Martin. She is one of my favorite artists who is known for drawing lines and writing words. I love her work. I feel like my life is intended to flow free of hesitation and full of purpose like Shantell’s pen on a canvas.

On September 25th I posted the image of a long road to depict that my path was finally clear and that now was the time to start a new journey. Bringing me HERE today where I can share my process with the intention of helping you do the same. 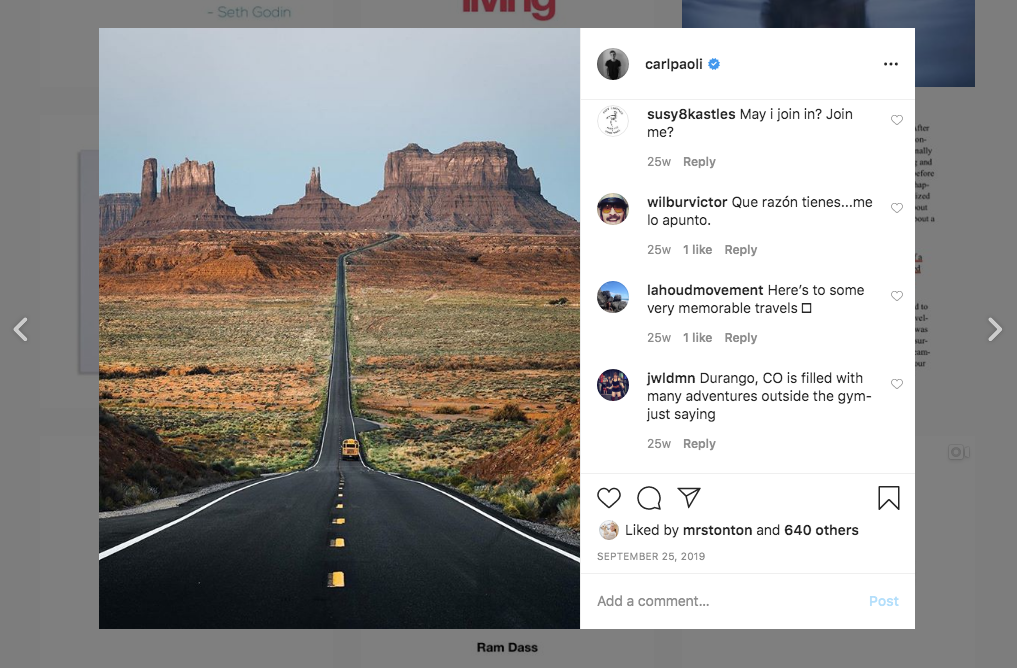 "If you really want to understand core movements and improve sports performance, this is the book to thoroughly study." - CaryO 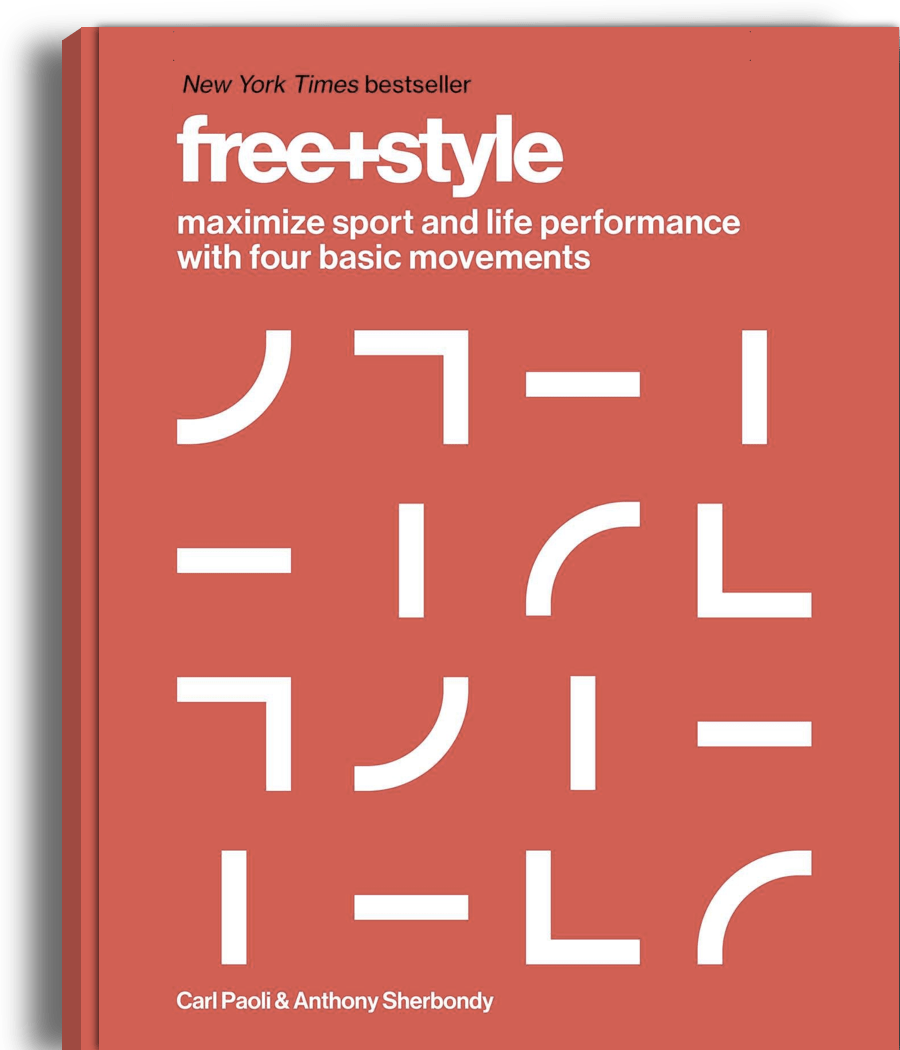